Dreams come alive if you believe in them 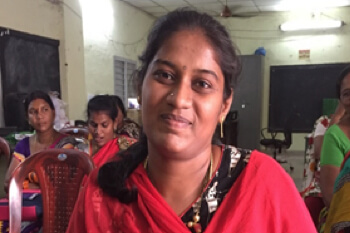 Usha, a resource person of an SHG Group in Vijayawada is a beautician by education qualification.

People often do not realise their passion and aptitude and eventually land up in a situation where they lack gratification in their work. Numerous reasons such as lack of self-realization associated socio-economic stigmas with it, lack of resources and most significant lack of financial literacy.

Usha, a resource person of an SHG Group in Vijayawada is a beautician by education qualification. Despite holding a professional certificate course, she could not pursue her career as a beautician for a long time because of the lack of resources. Notwithstanding being educated, people remain alienated to various government welfare schemes often because of unawareness and lack of interest. Robert Kiyosaki, in one of his quotes, says, “We were not taught financial literacy in school. It takes a lot of work and time to change your thinking and to become financially literate.” Globally, financial literacy is one of the least discussed topics and often looked down.

According to various studies, financial illiteracy is found to be the root cause of numerous issues, for instance, several people do not undertake to pursue their passion because they are not aware of helping agencies.

In most of the cases, individuals do not lack determination but inspiration. Jaadu Ginni Ka, a program for financial literacy is bridging this gap between the two. ‘I am a beautician by qualification and have worked with a few reputed organization. I wanted to start my beauty parlour. My husband was supportive but the only hindrance was funding. My husband’s salary was sufficient to run a house but for starting own business, it needs a big investment. I had no clue where and how to start. Meanwhile, I attended the training session of Jaadu Ginni Ka. While in the training, I realized the level of unawareness I had regarding the various government schemes especially the Mudra Loan. After the training, I discussed with my husband and we applied for the Mudra Loan in our bank. Now, it is been one and a half year since I am running my beauty parlour with four employees. I availed insurance for my parlour. With the surplus income, I have also availed health insurance for my family. I am not sure whether I would have been to turn my dream into reality had I not attended Jaadu Ginni Ka. It showed me the path to a bright future.’- said Usha

In the trajectory of more than two years, Jaadu Ginni Ka has helped people to realize their passion and inspired them to make a career of their choice. With a dedicated team, Jaadu Ginni Ka has set a goal to achieve which will ultimately grow to be a milestone for others to follow.

Drop us an email, we endeavour to answer all enquiries as soon as possible.